From the Editor's Desk:

Beginning on January 1, 2016, with Volume 15, there will be a new quarterly electronic newsletter published by the Baltimore City Historical Society. The new version of the Baltimore Gaslight will be devoted to promoting the history of Baltimore City through brief articles by its members (illustrated and approximately 5-700 words in length). Special features will include newly discovered images and documents from Baltmore's past, hinting at the stories they tell, calling for further research and interpretation.

For fourteen volumes in print and as pdfs on the Society's website at http://www.baltimorecityhistoricalsociety.org/program/newsletter.htm, Lewis H. Diuguid, former Washington Post correspondent, provided not only news and information on the organization, but also articles on various Baltimore history topics. With layout by Lew and Tina Fleming Warren, and staffed by Don Torres, the newsletter maintained a high standard of content, editing, and design. In 2008, when the masthead was changed to the Baltimore Gaslight, editor Diuguid explained: 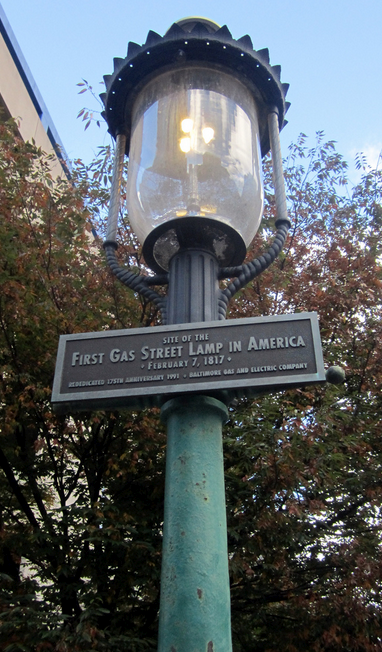 The Society’s board, the Newsletter’s staff, and responsive members, but one, stumbled for six years over founding Chairman John C. Byrnes’ admonition to come up with a proper name for this semiannual publication. Martha M. Yeager, a widow at Charlestown in Catonsville, had the answer:Baltimore Gaslight. Evoking a last-century image at once soft yet suffusing, the title also reaches back to the now shuttered icon of the Society, the Peale Museum. It won the vote of the membership at the Mayor’s Reception on Nov. 11 [2007]. ... Asked by the Society’s Donald Torres how she came up with the name, she replied, “It just came to me. I’ve been a BCHS member since 2003,” and thereby a charter member. Ms. Yeager, 85, grew up at St. Paul and 27th streets, went to Roland Park Jr. High School, Eastern for part of her high school and St. Mary’s (County) Female Seminary, now St. Mary’s College.

Two years later he lit it with gas—an innovation he had witnessed in London. His was the first in Baltimore, by all accounts. Whether this was the first gaslight in the country is widely disputed, as is the question of who had the first gas streetlight.

In 1817 Peale helped form a company, eventually to become Baltimore Gas and Electric, that installed this city’s first streetlight nearby - - at Holliday and Baltimore Streets. A classic city gaslight glows there today, a memorial to the flickering lamps that gave way to utilitarian electrification after World War II. Change had begun before the war, including installation of timers that, to the dismay of neighborhoods and their often beloved lamplighters, turned the gas up and down automatically. Then came the war’s random air-raid drills, and the fellows with their ladders and valve turners came back in style. The bowls of lights facing the harbor were blackened on the waterside. Many Baltimoreans who reach back to those times recall photos of street scenes that while dimmer than today floated a patina of romance lost to electricity. If readers care to share a favorite, send it to the Baltimore Gaslight in a future issue.

The Sun reported in 1957 that Mayor Tommy D’Alesandro had “snuffed off” the last gaslight in a ceremony. Firms did a brisk business for a while, buying up the rejected cast-iron street lamps with their glass bowls and installing them in people’s gardens. When the supply ran out, one local firm began filling worldwide orders with an aluminum replica.

Much to the dismay of the Society, Lew has decided to retire as the unpaid editor of the Baltimore Gaslight. In order to avoid the darkness that would be sure to follow the loss of one of its most productive and enlightening volunteers, the Board of the Baltimore City Historical Society has decided to convert the newsletter into a blog published four times a year, each volume shepherded by a guest editor volunteer from within its membership. For Volume 15, Ed Papenfuse has agreed to take on the responsibility as a poor substitute for Lew. He expects that over the next year a volunteer will step forth to take on Volume 16, and in the meantime will attempt to reach Lew's high standard of promoting the Society's goal of furthering appreciation of a truthful history of the Monumental City. In that regard he looks forward to the submission of articles and essays from the membership sent as hard copy or emails to baltimoregaslight@gmail.com of not more than 5-700 words.

Each issue of the the newsletter may include a 19th century stereo photograph drawn from the Bready Collection of the Maryland State Archives and members' collections.

Who can identify where this is, who Sprigg and Fisher were, and

supply a current image of this corner?

Send your answers to baltimoregaslight@gmail.com

Note that this image can be viewed in 3D, with the Baltimore City Historical Society 3D glasses available while the supplies last for a five dollar donation by cash, check, or money order, to the

or by Paypal sent to baltimoregaslight@gmail.com

Topical Reviews of Books, Articles, and Blogs On The History of Baltimore

As a number of society members enjoy reading the newsletter in print, copies of each issue of the blog can be mailed gratis to those who indicate on their membership subscription and renewal forms that they would like to receive paper.

Posted by Managing Editor at 2:08 PM

Places to visit on the Web for Baltimore History

Have a question about Baltimore City History? Questions and Comments are Welcome